19 Park Place was included in Forbes “12 Spectacular Garden Walls and Atriums Worth Contemplating.” Click to read the full article. 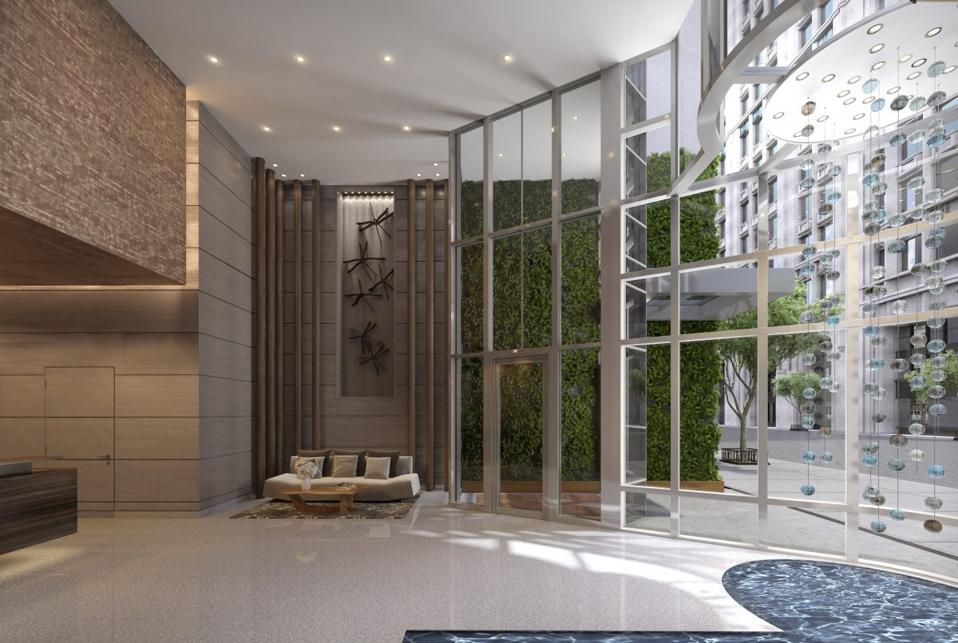 A fresh, modern logo is the cornerstone of HPDM’s new visual identity, which will be used across all company marketing materials, including a redesigned website (http://www.hpdmny.com) featuring all of the development properties it represents that are currently on the market. The firm’s new tagline, ‘the craft of new development,’ captures its unique and holistic approach to the new development process.
“Over the past decade, HPDM has partnered with developers – many more than once – on more than 400 projects, representing billions of dollars in sales and over 10,000 new residential units brought to market,” said Stephen G. Kliegerman, president of HPDM. “We have grown tremendously and our new branding better reflects the team’s expertise in every stage of the development process. From the first spark of inspiration to the final closing, our highly specialized team members work side by side with developers through each phase of the process to craft some of the most exciting living environments in New York City.”
A leader in both Manhattan and Brooklyn, the HPDMteam launched marketing campaigns for 13 new developments in 2013 and will have brought nearly 40 projects to market by the end of 2014. Some of the firm’s current projects include: 388 Bridge in Downtown Brooklyn, 19 Park Place in Tribeca, 540 West 49th Street in Hell’s Kitchen, Oosten in Williamsburg, 21 West 20th Street in the Flatiron District, Harbor’s Edge in Sag Harbor, and The Adeline in Central Harlem.

Led by Kliegerman, HPDM’s record of success is attributed to its team’s multiple skill sets, cumulative years of experienced talent, and close collaboration with Halstead Property, an organization which has built its brand into one of the most visible and respected in the industry. Halstead Property operates 30 offices across three states in targeted, high-traffic neighborhoods that serve as a base for over 1,200 active resale and rental agents.
“Steve has been with our organization for more than 16 years and we are absolutely thrilled for this exciting announcement. Over the last 12 years, he has truly dedicated himself to running this division and done an outstanding job with his high level of professionalism and an incredible eye to details. We look forward to the continued growth that comes from Steve and his talented team,” stated Diane M. Ramirez, CEO of Halstead Property and James M. Gricar, President of Halstead Property.
The Halstead Property Development Marketing management team is comprised of Roberta Benzilio, executive vice president; William Ross, director of development marketing; Hunter Frick, director of development marketing; and Robin Schneiderman, director of new business development. Brendan Aguayo, managing director, is the most recent addition to the management team after Aguayo Realty Group joined the company last year. To accommodate its growing team, HPDM moved to a new office located at 445 Park Avenue last month.
Setting HPDM apart from its competitors is the company’s dedicated research team, led by Robin Schneiderman, Lisa Rae Castrigno and Matthew Petrallia, which monitors the latest economic, market and consumer trends – vital for carving out uniquely compelling offerings. Comprehensive market analysis extends throughout the entire development and sales cycle, helping developers optimize site conditions and pricing levels in order to most effectively tailor properties to targeted buyers.
HPDM is also known for partnering with the highest caliber architects, interior designers, creative agencies and public relations firms to position projects for success in the marketplace. By addressing the unique demands and market conditions for each project, the team ensures a higher return and reduced absorption period.
About Halstead Property Development Marketing
Halstead Property Development Marketing (HPDM) is a leading sales and marketing firm dedicated to the craft of new development. HPDM partners with celebrated developers, architects, and designers to create superior building and living experiences of the highest caliber. Having represented billions of dollars in sales over the past decade, the team brings considerable skill, insight and dedication to carving out truly unique properties that benefit residents and developers. HPDM collaborates at every stage of the process, from site analysis to the final closing, crafting substance through the team’s ardent attention to the development process. All properties receive additional exposure through the unmatched domestic and international Halstead Property network. http://www.HPDMNY.com

15 Hubert Street: The block-through landmarked building—also known as 407 Greenwich Street—is undergoing a gut renovation and vertical enlargement lead by the omnipresent CetraRuddy. When complete, the building will have a ground-floor restaurant, nine 2,300-square-foot apartments on floors two through four, and three larger duplex penthouses on floors five and six. There will also be a rooftop common space. BBH notes that thebuilding’s teaser site avails that pricing will be between $2.8 million and $5.2 million. The building is mostly “studios to two-bedrooms,” says Stephen Kliegerman, president of Halstead Property Development Marketing. Plus, there will be a “duplex penthouse, which will have three bedrooms and 2,672 square feet — we anticipate that coming on the market later this year.”

51 Jay Street, 498 West End Avenue, and 19 Park Place are some of the fantastic offerings set to launch this fall.