The New York Times tracks Brooklyn’s influence in Paris—in food trucks. Since the rise of food trucks here in NYC, an American has taken the fad to France. After many hurdles of finally getting open, her burger truck has been a wild success; and her cuisine is “très Brooklyn,” a compliment chock-full of street cred.

“Among young Parisians, there is currently no greater praise for cuisine than ‘très Brooklyn,’ a term that signifies a particularly cool combination of informality, creativity and quality.”

For young Parisians, organic meat and high-grade ingredients in street food are still very uncommon. They see New York and California-inspired cuisine as chic and relevant, and are embracing it so much that the Parisian trucks are known to sell-out on a daily basis. 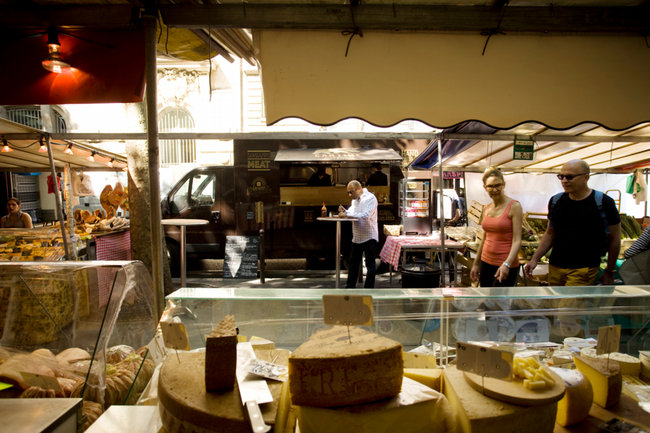 Read the full article at The New York Times: http://www.nytimes.com/2012/06/04/world/europe/food-trucks-add-american-flavor-to-paris.html

My buddies accept you can acquire research paper here https://www.order-essay-online.net

TechCrunch takes a look at how tablets are revolutionizing the construction and the new development process. They call out that architects and engineers have become so efficient that they only cost about 8% of the total construction budget, and are streamlining design, communication, and effort with digital tools instead of paper.

The entire planning process is digital until construction—then come printed construction plans and blueprints. With so many digital tools available, tablets and advanced software hint a more streamlined construction process.

Today’s Featured Unit is the spacious 2,237 SF 3BR / 2.5 Bath condo in Upper Manhattan at 5th on the Park. This expansive unit is complemented by the wraparound terrace & massive windows that encase the entire home. The 9 – 10′ ceilings highlight the beautiful kitchen, granite counter tops and cherry wood floors.

Some of this building’s amenities include an attended lobby, pool, bike storage, garage, children’s playroom and fitness center.

Schedule an appointment to tour this beautiful unit before it’s gone!

People believe anybody ought to obtain an essay right here www.homework-writer.com

One of the largest most ambitious urban farms has been proposed for the Bronx, a plan that would eclipse the current urban farm development in Brooklyn.

The Five Boroughs contain a lot of buildings and with those buildings comes a serious amount of unused rooftop square footage. The Bloomberg administration knows this which is why they have proposed a 200,000 SF farm on top of a food distribution center in Hunts Point. Not only will this project make growing and producing food easier, it will create more jobs in the Bronx peninsula, which already boasts a staggering 115 wholesalers generating $3 billion in annual sales to 23 million customers.

The Brooklyn plan is currently the largest rooftop farm in the US, however, this recent Bronx proposal would be twice as big! Space around the city is at a premium making farming complicated and expensive.

This growing trend of urban farming is an increasingly interesting solution that we will be following closely!

Exchange a sensibility and get admission essay right here https://essaywriterservice.net/ to look intelligent.

Today’s Featured Unit is following the growing trend of buildings with condo style amenities that feature the space of a townhouse. This 3 BR/2.5 Bath 2,512 SF condo at Kirkman Lofts is located in the heart of DUMBO. The dramatic ceilings and open kitchen provide an abundance of space that showcases the beautiful appliances and hardwood floors. This unit comes with a private elevator allowing access to the stunning rooftop terrace.

Some of this building’s amenities include a health club, attended lobby, storage and building courtyard.

Kirkman Lofts is over 80% sold so take advantage of this weekend’s open houses Saturday from 2-4 and Sunday from 2-4.

Swoop into the world of steep conditions using an assistance of http://www.essaysolution.net/ studying educational site.

Western Brooklyn was not always the sought after location it is today. Fortunately thanks to the love and compassion of Everette and Evelyn Ortner now neighborhoods like Park Slope are common place in Brooklyn Real Estate conversations.

When the Ortners moved to Park Slope in 1963 they fought hard to preserve its buildings, convince friends to buy rundown brownstones and raise money for neighborhood improvements. Some couples recall buying Park Slope brownstones in the 60s for around $25,000; these same buildings easily fetch upwards of $2 million in today’s market.

Recently a group of friends who were all coaxed into purchasing these delightful brownstones by the Ortners gathered to reminisce about the couple who both passed away this decade. The Ortners liked to joke about how much money they made their friends by convincing them to invest in these properties.

Thanks to the help of the Ortners we can all appreciate the beautiful buildings and tree lined streets that Park Slope has to offer!

Clearly, www.essaysheaven.com/ should be first-rate place around.

Today’s Featured Unit displays spacious uptown living at its finest. This massive 1,812 SF corner 3 BR/2.5 Bath condo at 5th on the Park features phenomenal views from large windows seen throughout the generous living space. You will fall in love with its 9-10’ ceilings, cherry wood floors and spectacular kitchen all while gazing at Mount Morris Park, George Washington Bridge and Morningside Park.

Some of this building’s amenities include an indoor heated lap pool, sundeck, resident lounge, on-site valet garage and fitness center!

Contact Michael Davis at (212) 381-2532 or email him at mdavis@halstead.com to enjoy true uptown luxury.

The Marvelous solution to acquire movie review at this site http://www.essayprofs.com/